After the delight of the builders last week, rather a different story this week. I was using the patio brush to clear the gaps between the paving stones thinking it was time we bought a small pressure washer, to clean the build-up of dirt on them, when a young man appeared at the front door asking whether we wanted our drive and patio cleaned. I don’t usually buy from/give work to door-to-door salesmen but this seemed a good idea!

We thought it would save time, effort and money…….. wrong, wrong and wrong! They took nearly 3 hours, much of it they spent cleaning the driveway, walls and windows of next door due to mud and sand being plastered over them! Then, rather than saving effort, it will take a long time to get rid of the wet sand all over the walls, windows and, worst of all my lovely plants, especially the Sedums. (How would you clean wet sand off your Sedums, S,D and H?) Also, we could have bought a small pressure washer and had some change!

I washed the patio table and chairs then Granny’sGardenHimIndoors cleaned them again because they had dried with a layer of sand still on them, then I scrubbed them again to get the remaining sand and dirt off! Hey-ho, we live and learn and I won’t moan any more……. but one or two of the photos are quite sad.

Here are my Six-on-Saturday for this week. 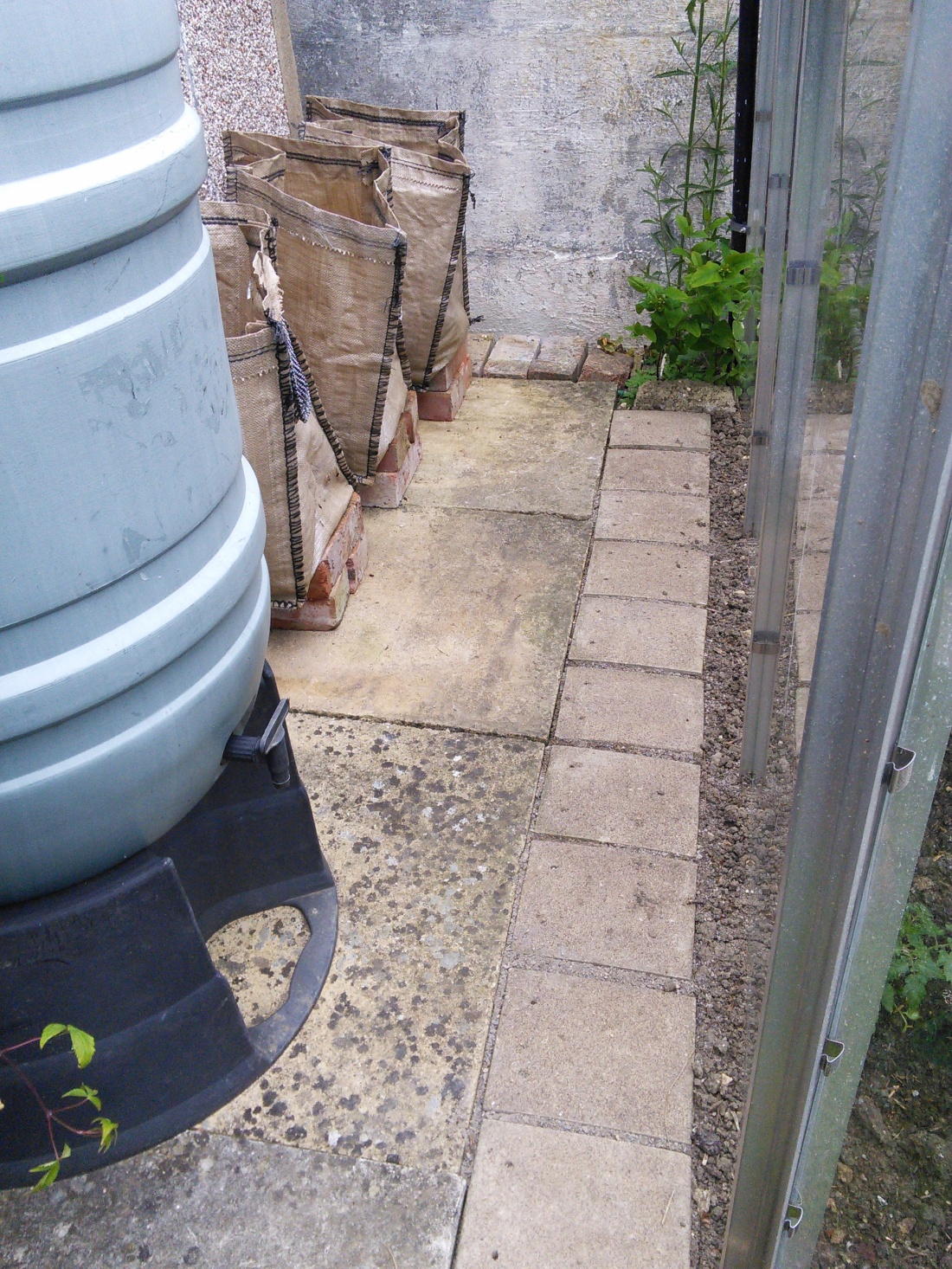 This is the area between the garage and greenhouse. I have the potato sacks there each year but find it awkward manoeuvring myself around the water barrel because, where you can see the small leftover tiles, there was a 20 cm drop. I filled the gap with rubble, then gravel then soil and sand then placed the tiles on top. It may not be beautiful but I am very pleased with it – it makes a big difference for walking around the barrel and all I used was stuff just stacked behind the garden shed. 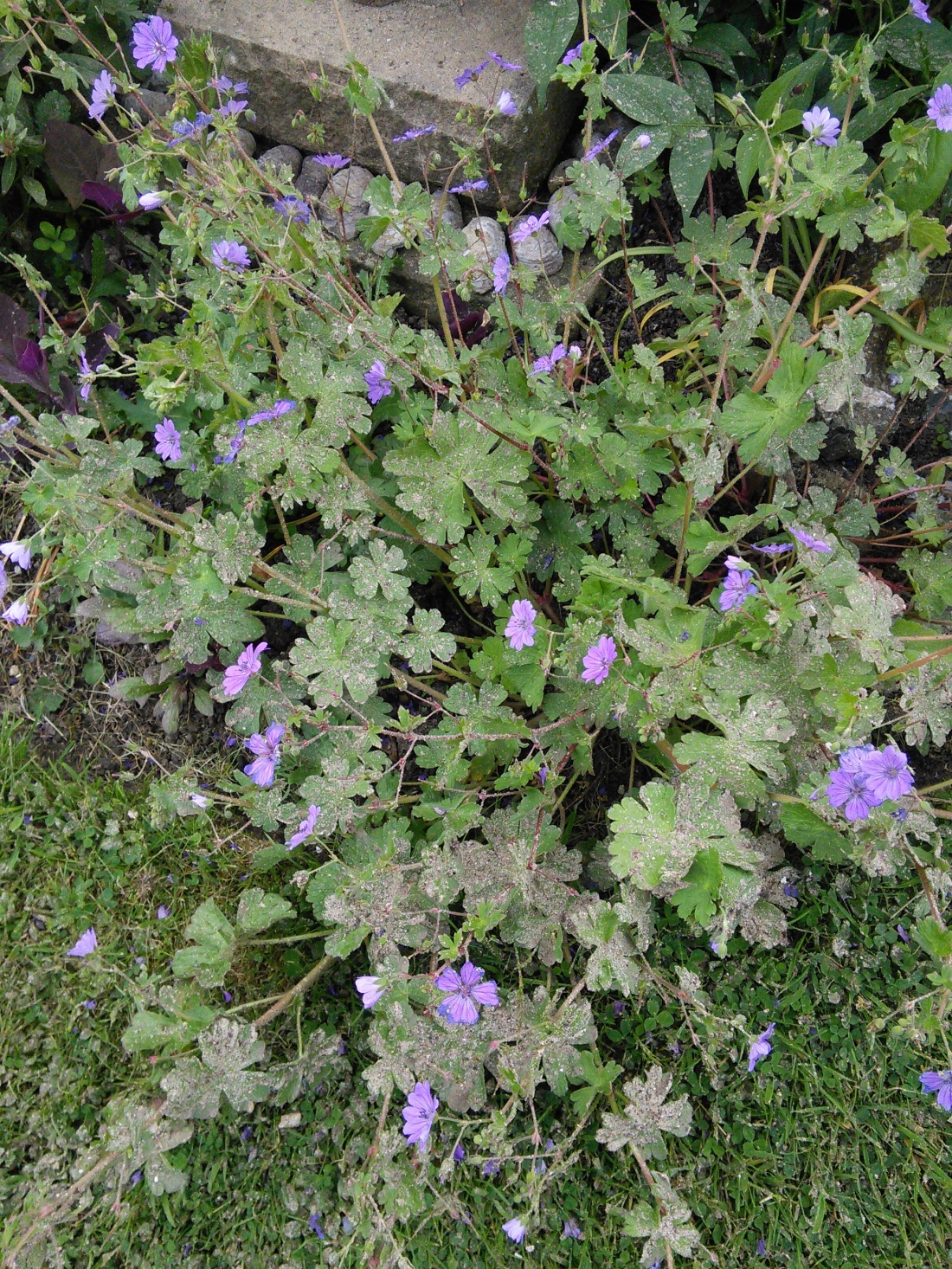 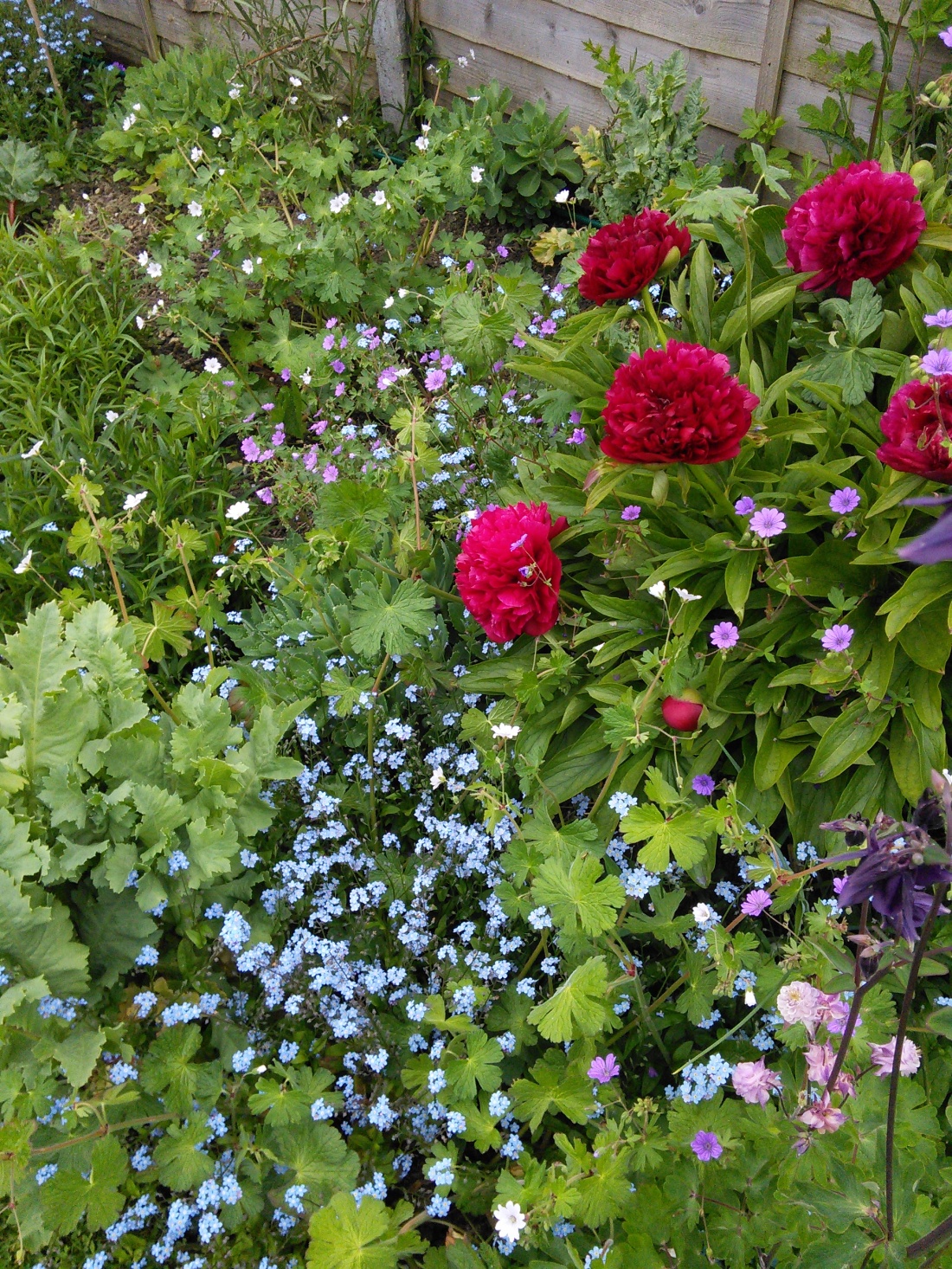 This is the other side of the garden. Similar to my last week’s photo but I noticed the white perennial geraniums. Rather pretty. 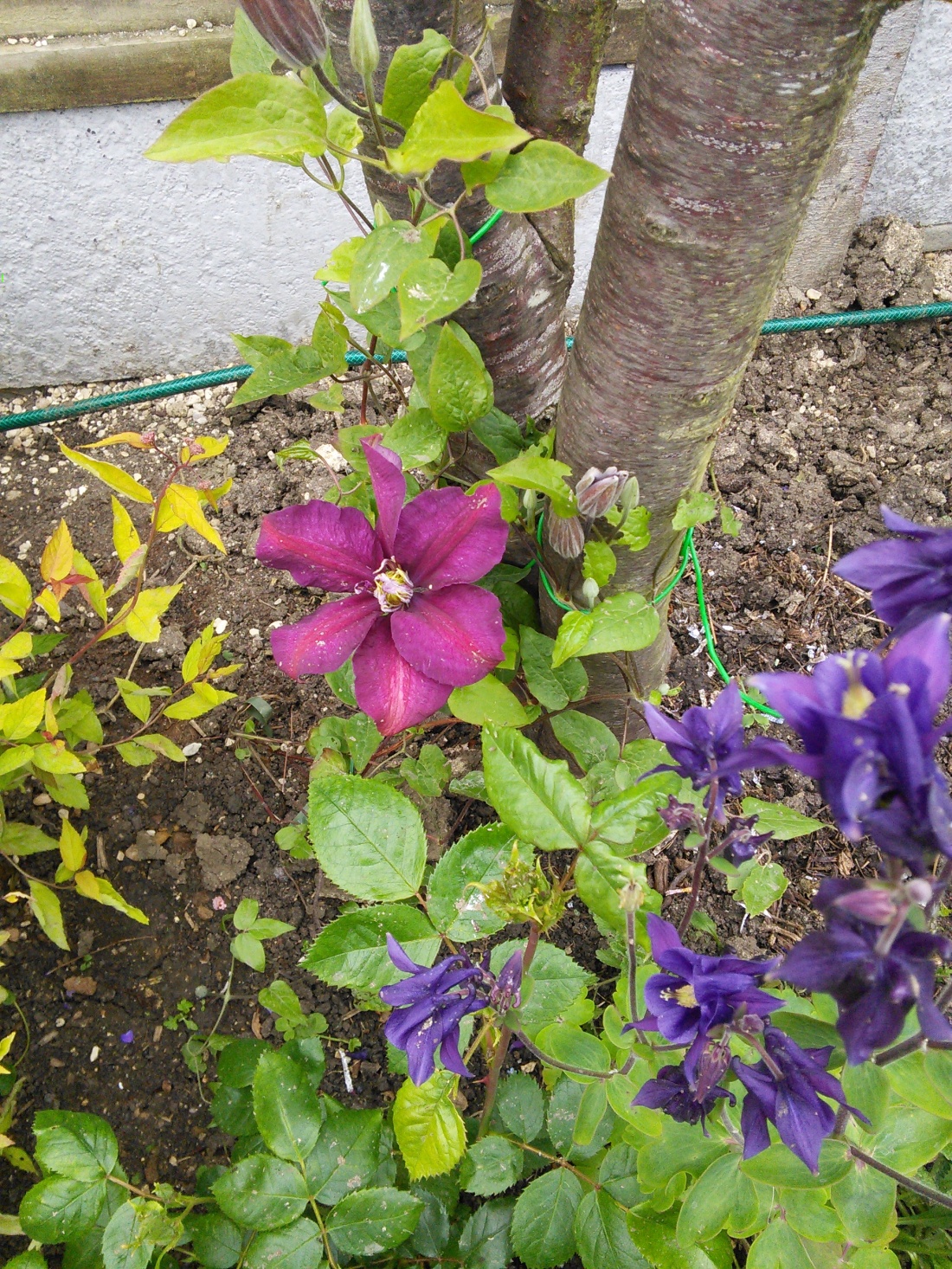 Last year I moaned about this not being a red clematis, as labelled, but when I looked at it a couple of days ago, it was a beautiful reddish, purple! Slightly speckled with dirt now. I am trying to grow it up the plum tree “skeleton”. (The stones at the back are from under the panels from next door. I haven’t managed to clear all of them yet.)

I have planted the sweet peas around the lovely obelisk that Mrs P gave me last year. I used seeds then which came to nothing, so I am hoping for better results this year. The salvia front left of the photo was given to me by Mr P last year – it’s looking good. Sadly the other one didn’t survive but I can split this later in the season. 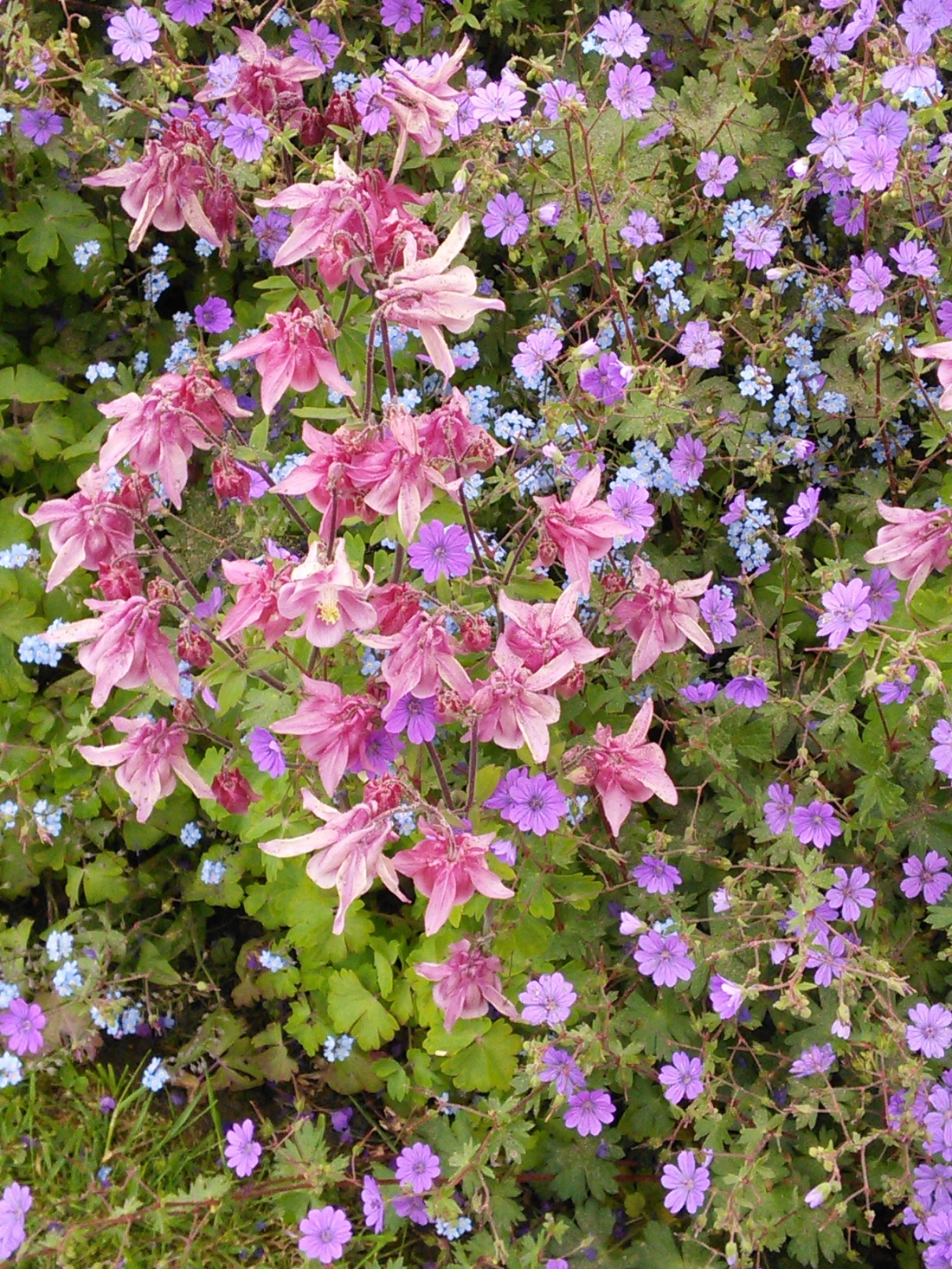 Most of the aquilegias in the back garden are a deep purple colour, but these in the front garden are mostly this pretty pink.

That’s it again apart from last night’s tea. As you know, Friday night is Curry night and I used some of the remaining broccoli leaves in the chicken curry and parsley and mint in the mushroom and celery curry. I needed to wash the parsley and mint many times to remove the dirt! I don’t normally make this combination but since I had mushrooms and celery in the fridge, all I needed to do was Google “Mushroom and celery curry” and choose which one I wanted….. amazing! 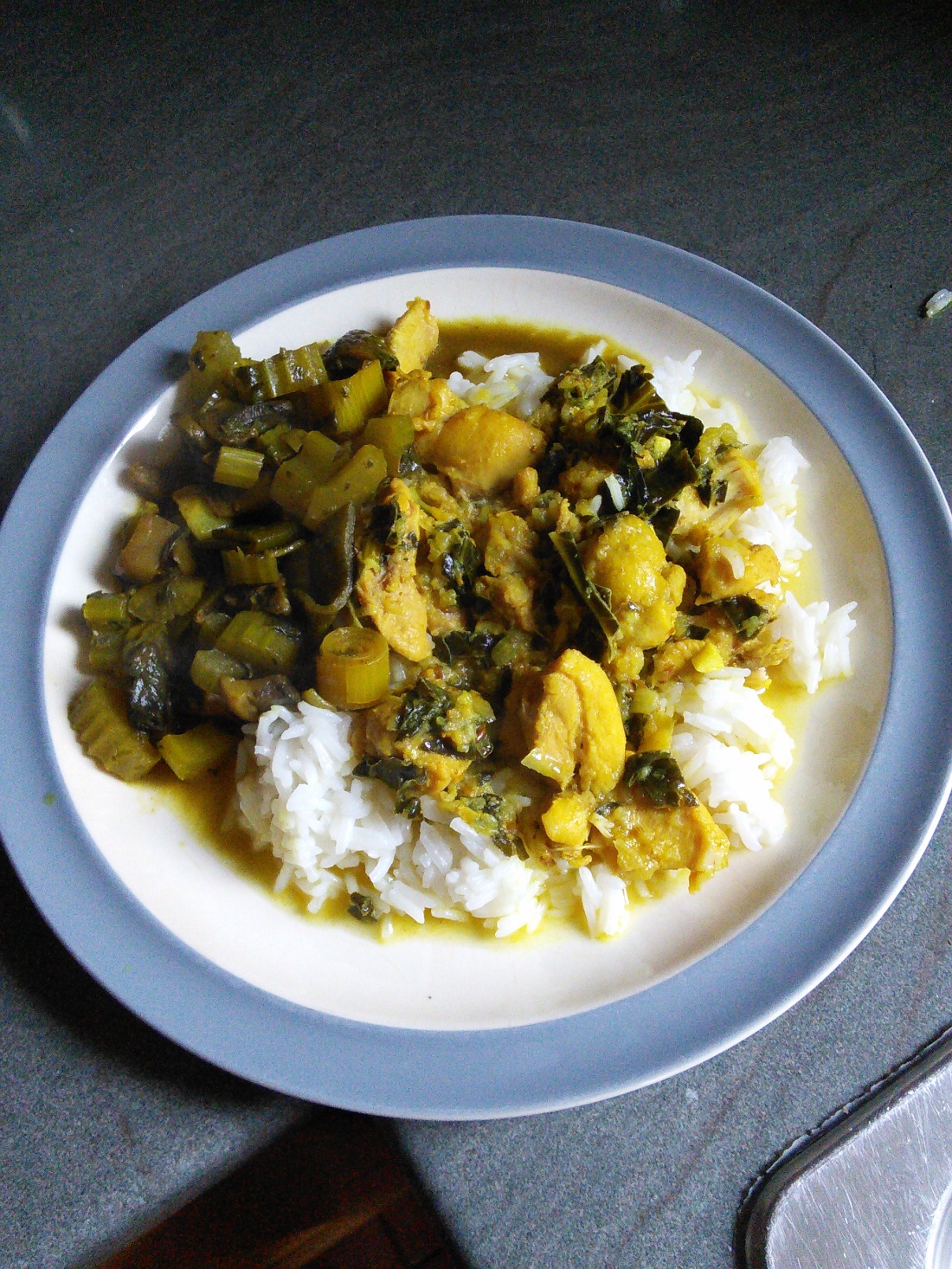 (I know the colours are not that appetising, but mushrooms tend to make the dish rather grey.)

View all posts by grannysgarden